Udi Avshalom was late for his Zoom interview with ISRAEL21c because he was wrapping up a meeting at his California home with Kanye West, the hip-hop legend now officially known as Ye.

Avshalom is the acknowledged sage of sneaker culture, which he defines as something that “makes the world a whole lot happier” compared to fussy, uncomfortable shoes like wingtips and high heels.

“You can’t put a sneaker on your foot without smiling, can you? So I picked that up as an inner city kid growing up in Brooklyn. In my neighborhood, what made people happy was having a gold chain or a pair of sneakers. We weren’t as wealthy as the jewelers, but I always figured out how to get a pair of sneakers,” he says. “And that’s where I found my passion.”

Avshalom was born in Israel and immigrated with his parents when he was six years old. They settled in Brooklyn but not in any of its Jewish neighborhoods.

“I think we came in so broke that I landed in an urban, predominantly black community. And the community that adopted me, believe it or not, was hip-hop. I was a Wu-Tang Clan partner,” he says, referencing the 1990s hip-hop sensation.

“It’s almost as if the street made me. The cops were my first ‘owners’ because we were peddlers at first. And it was the inner city kids and the hip-hop community who shared the block with me,” says Avshalom. 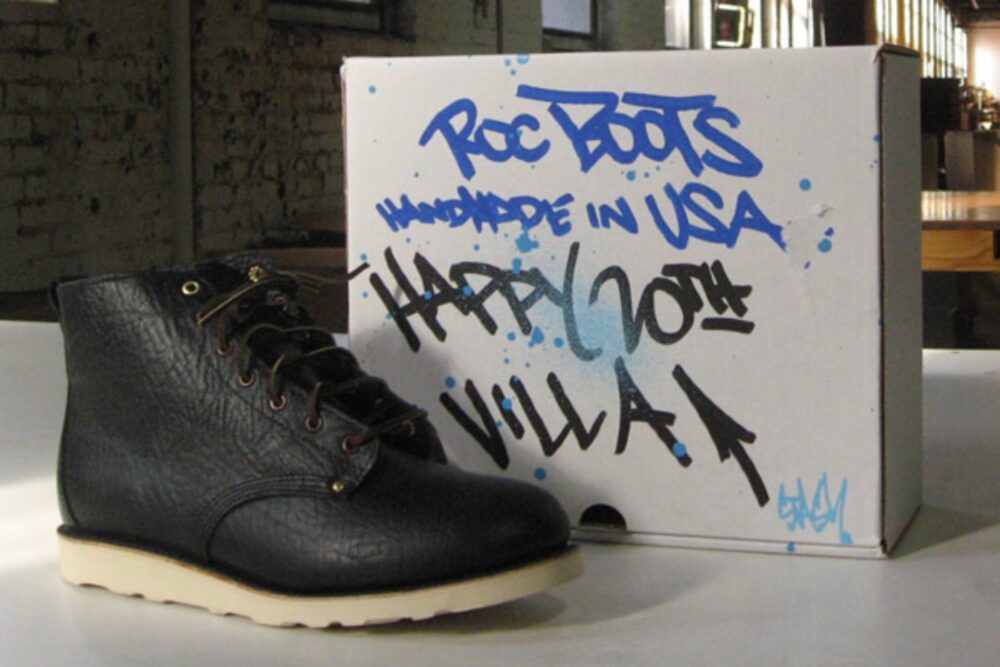 Some of them became high profile celebrities while Avshalom achieved stardom behind the shoe. But they stuck together, personally and professionally.

“Kanye considers me one of his closest allies in his business dealings – and more importantly, a true friend.”

Yet Avshalom never forgot his roots. On the contrary, he takes advantage of every opportunity to deepen them.

Which explains why he thinks the time is right to bring sneaker culture to Israel.

“I will either associate with people in Israel or take care of it myself. Israel has a lot to offer in terms of design resources and technological resources. There’s no reason Israel can’t make sneakers,” the former Yeezy COO says. 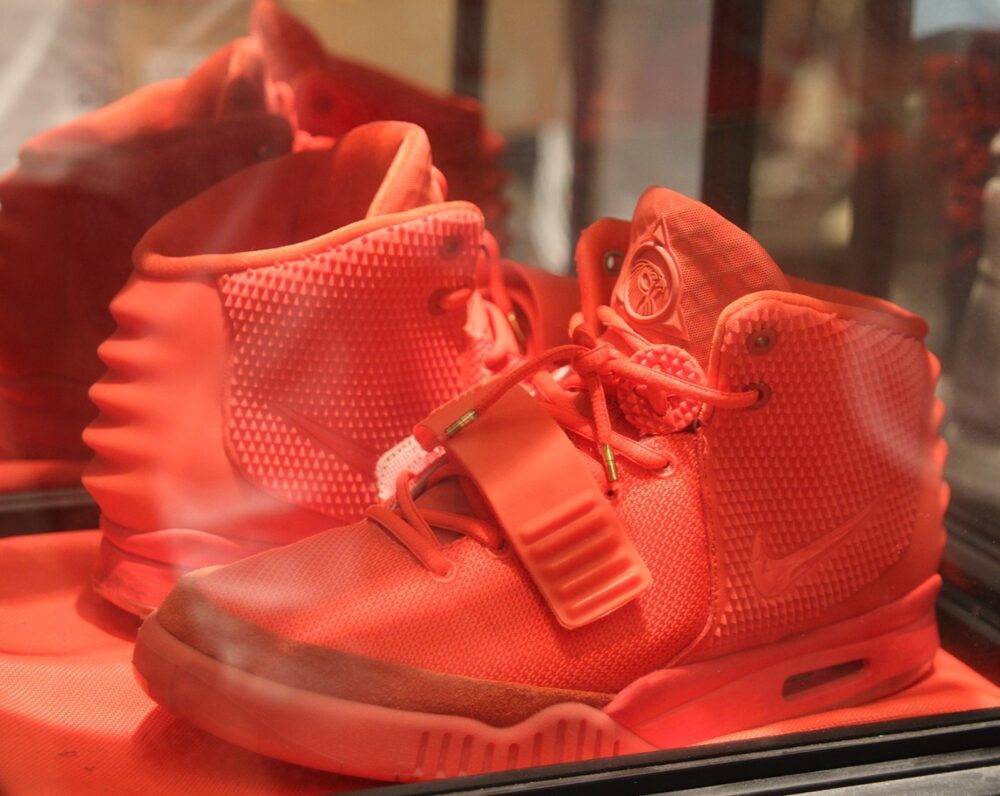 “Red Octobers” a 2015 style from Kanye West’s Yeezy line with Adidas, for which Udi Avshalom was COO. Photo by Kalvin Chan via Wikimedia Commons

“When I feel something like that, just like finding a good location for a store, it’s only a matter of time until other good things follow. And I want to be a part of that.”

Avshalom often visits Israel. “I’m a big advocate that if you forget your history, you have no future,” he says.

“Before every agreement I sign, before every decision I make, I have to go to the [Western] Wall and touch it. I’m not a religious guy at all. I’m just very traditional. And I want to make sure I never forget.

“On my mother’s side, we only had two people who survived the Holocaust. And we are in America because of one of them”, his aunt Stephanny Torrance.

“Stephany was one of the only women to escape from Auschwitz. Eventually she married an American GI and emigrated to America. She and my grandfather were the only two people left in the family.

Avshalom’s grandfather helped set up what would become the Israel Defense Forces. “He was a war hero. He fought in the Jewish Brigade for the British and he fought in the partisans. He really was an amazing guy.

“Just before he died, he said to me, ‘You’re in America, but don’t forget that you’re Israeli first.’ For him, Israel was bigger than himself, so he made sure to leave that message for his children, and until today, it’s still bigger than me for me,” Avshalom says.

“My wife is Israeli and I make sure my children are still in Israel. I think I’ve always connected more to Israel than to being Jewish in America, and I think that’s a very important ingredient that I have to keep in my mind and in my heart. Still.”

Israelis, he continues, live with a lot of tension and need the smile that sneaker culture could put on their faces. And not just Jewish Israelis but also Arab Israelis.

“One of my first sneaker stores was in Brooklyn and my clientele was heavily Palestinian,” he says. 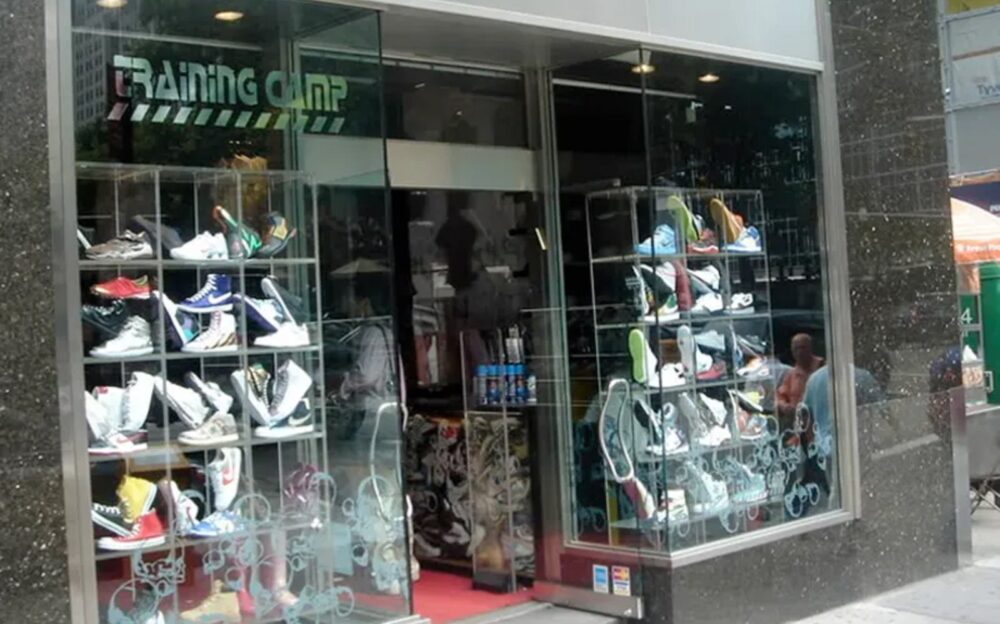 “I was this Israeli trader that they loved because they were also immigrants, broke, looking for little bits of contentment and little symbols of success. And I always made sure people felt good with a pair of sneakers.

He moved to California only four years ago. “I’m not in California — I’m in New York or in denial,” he jokes.

The rabbi remarked to Avshalom that he had never seen a crowd like this at a Jewish affair.

“And I said, ‘Well, welcome to New York, my friend. Welcome to a sneaker shop guy’s ideas. These are the people who were with me all the way.

Avshalom wants to bring Ye to the holy land as part of introducing sneaker culture.

“Eventually,” Avshalom says, “he’s going to bring peace to the world through sneakers.”