Sophie Turner and her husband, Joe Jonas, were spotted in New York City earlier on Thursday.

The Game Of Thrones alum, 26, and the Jonas Brothers singer, 33, pulled off smartly laid-back ensembles as they enjoyed an outing with a few of their friends in the Big Apple.

The two lovebirds recently welcomed their second child into the world two months ago in July, and have yet to reveal the name. The talented stars also share a two-year-old daughter, Willa.

Afternoon outing: Sophie Turner, 26, and Joe Jonas, 33, were spotted hanging out in the Big Apple with a few of their close friends earlier on Thursday

The talented actress showed off her fit physique in a figure-hugging gray bodycon dress that fell past her knees.

To stay comfortable strolling around the bustling city, the mum-of-two slipped into a pair of black and white Adidas trainers with matching black socks.

Sophie slung a colorful handbag with a gold chain over her right shoulder to carry a few necessary items. In her free hand, she could be seen carrying a black gift bag. 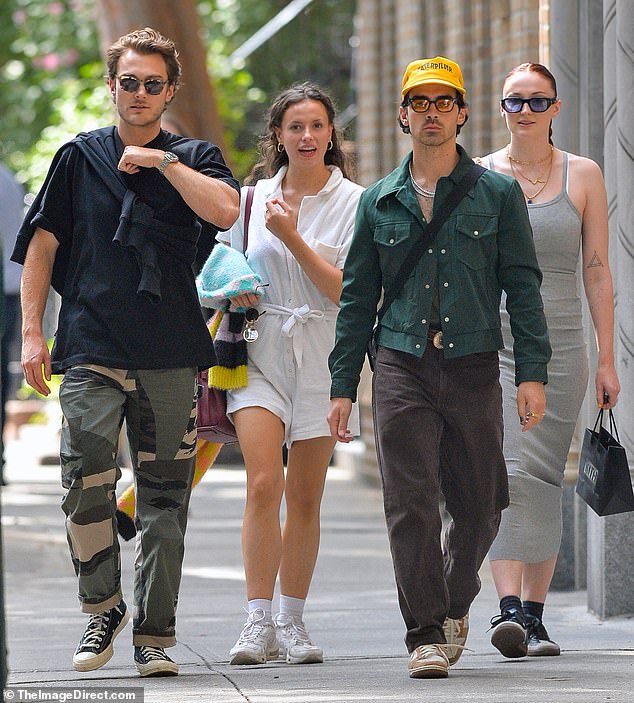 Soaking up the sun: The couple and their friends seemed to be having a great time catching up on a stroll through the bustling city

Sophie parted her hair down the middle and pulled her long locks back into a sleek and fashionable braid.

To accessorize her laid-back ensemble, the Barely Lethal actress added gold necklaces to add a pop of color to her monochrome dress. She put on a pair of blue sunglasses to shield her eyes from the bright afternoon sun.

Joe also opted for comfort and donned dark gray jeans that were tied at the waist with a brown belt.

The Cake By The Ocean singer added a forest green long sleeve jacket which he left unbuttoned. For a splash of color, the Disney Channel alum added a bright yellow cap with Caterpillar printed on the front, referencing the famous machinery and equipment company.

A black crossbody bag slung over his shoulder as he sported a pair of orange and white Nike sneakers. 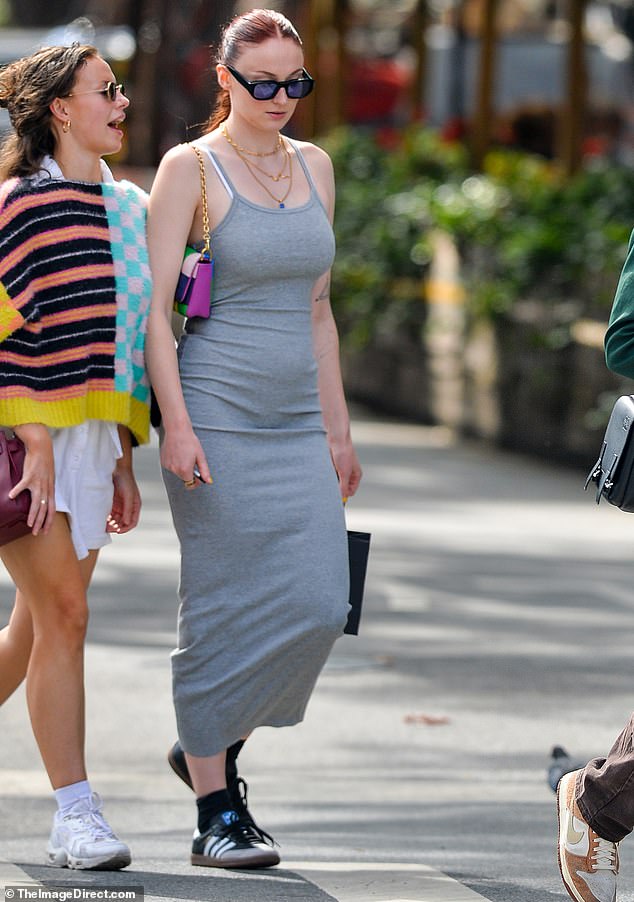 Happy couple: The two stars started dating in 2016 and married in Las Vegas in 2019, followed by a second, bigger ceremony in Paris later the same year 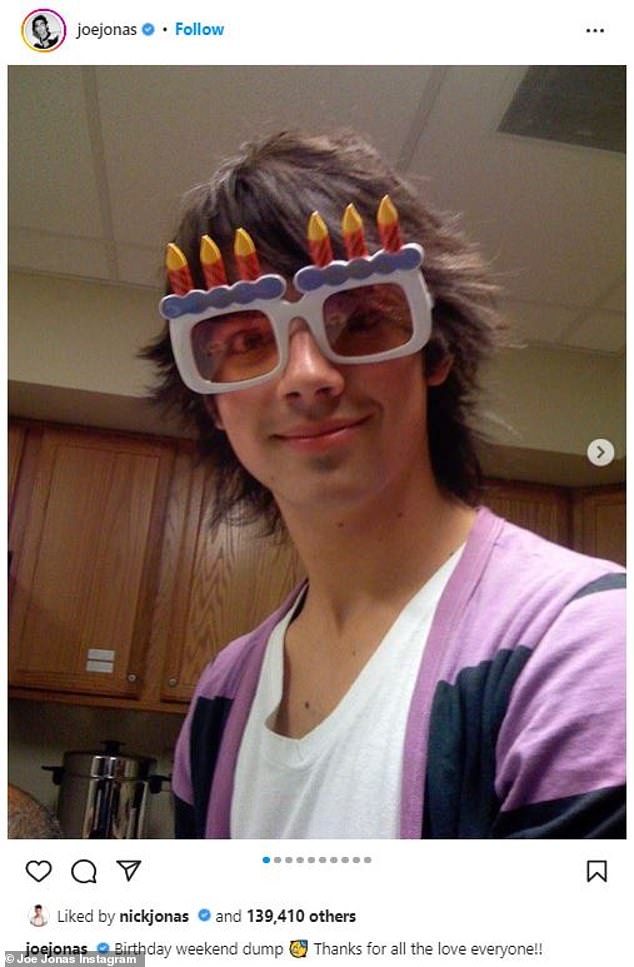 Hitmaker Leave Before You Love Me recently opened at People on how he balances his career and his family life.

“It’s an adjustment period,” he told the entertainment publication. “Just something I’m learning as I go, I think I can work a little harder now to make time.”

“I’m still trying to figure it out. Some weeks are a little harder than others, but that makes it a lot easier when you’re enjoying your gig,’ the artist added.

The actor recently filmed a Korean War drama titled Devotion, which will premiere at the 2022 Toronto International Film Festival on September 12. “The story is wonderful and I can’t wait for everyone to see it,” he said. People. 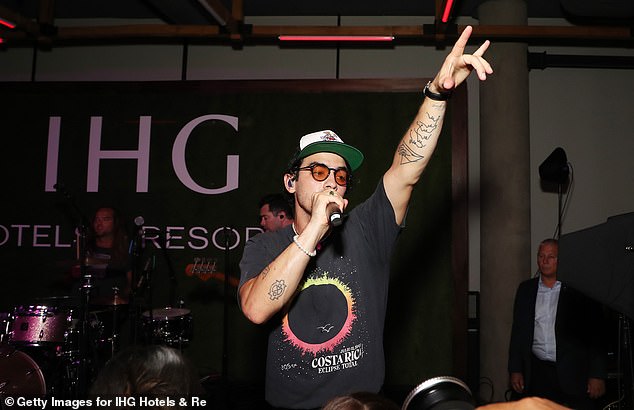 Talented: The singer not only has a passion for performing, but also for acting, and recently worked on Korean War drama titled Devotion; seen on stage in August in New York

Busy: Joe and Sophie have focused on their careers, while balancing their family life and raising their two children

Sophie has also completed a film called Do Revenge, which is set to premiere on Netflix later this month on September 16.

The film is based on Alfred Hitchcock’s Strangers On A Train and is directed by Jennifer Kaytin Robinson. 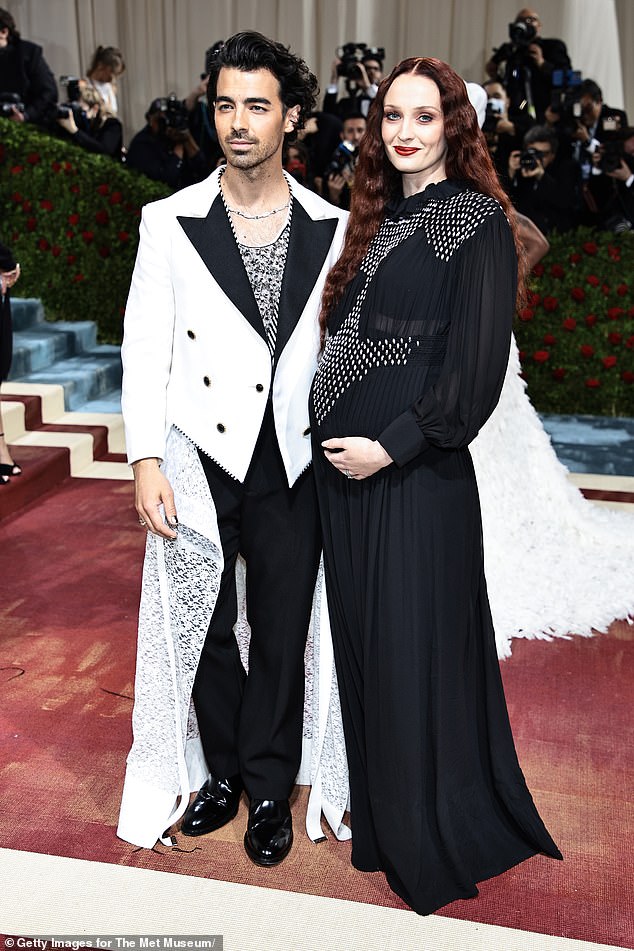 Hard-working parents: The two lovebirds continue to balance their professional lives and focus on their two daughters; seen together at the 2022 MET Gala in New York